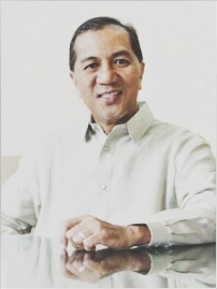 Rev. Fr. Jessie Hechanova was born to Paterno Hechanova Sr. and Alice Pastrana Morana on December 22, 1949 in Bacolod City, Negros Occidental. Twenty years after, he entered the Brothers of the Christian Schools. In 1979, he took his first vows in CICM, and later he served as a Deacon in Yaounde, Cameroon, Africa in 1982. It was on February 12, 1983 when he was finally ordained a priest in Ogbere, Nigeria, where he took his CICM internship.

Fr. Jess’s academic preparation reveals comprehensiveness and excellence. He was a Jose Rizal First Honor Awardee when he graduated Bachelor of Science in Education major in Natural Sciences at De La Salle University in 1972. He also finished his Bachelor of Arts major in Philosophy in the same year and the same University, where he received the highest mark in oriental philosophy. In 1982, he completed his Bachelor of Science in Theology at Ecole Theologique St. Cyprien in Cameroon, Africa. Quite commendably, his zeal for academic excellence is always motivated by his passion for the mission.

From 2001-2004 he was a member of the Ad-Hoc committee on Internationalization and Interculturality in Rome. In 2011-2012 Fr Jess was a member of the pre-capitular committee tasked to prepare important documents and procedures for the 2012 CICM general council election in Rome. At present, he is the chairman of the Provincial Committee on Education of CICM-Philippines.

Father Jess’ curriculum vitae reflects an inspiring story of a man on a mission. His professional and pastoral involvement in the academe shows a broad breadth of work exposure. In the mid 70s, he served as Guidance Counselor in La Salle High School in Lipa Batangas, and in the University of St. La Salle in Bacolod. Later, he taught at the University of St. La Salle in Bacolod and De La Salle University in Manila. He then devoted his time as the Vocation Director of the De La Salle Brothers of the Philippines from 1978-1979.

It was in 1984 when Fr. Jess became the Dean of Studies in Maryhurst Seminary in Baguio City. However, in 1987, he went back to Africa to be the Parish Priest of Koza, North Cameroun. When he came back to Baguio City in 1995, he labored as the Chaplain of SLU Laboratory Elementary and High Schools. In 1997, Fr. Jess assumed the presidency of Saint Mary’s University in Bayombong, Nueva Vizcaya, whose employees remember him to be down-to-earth and a hands-on leader. And to this day, employees and students of SLU are also privileged to experience the same admirable leadership qualities of Fr. Jess's transformative presidency .